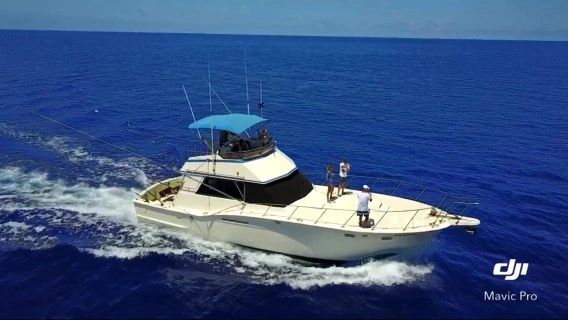 Welcome to Island Charters of Hawaii ...#1 in Honolulu boat charters

Mazel Tov is docked at the beautiful Kewalo Basin, conveniently located next to Waikiki beach in Honolulu, Hi

Our gorgeous Hatteras 46 Convertible. with enclosed helm delivers great visibility, comfortable seating, and air conditioning make for a perfect full day fishing charter. The captain’s helm is equipped with top of the line electronics to insure a safe and successful fishing adventure. The cabin below delivers all the comforts of home – comfortable couch seating with dinette, galley, head and satellite tv. The cockpit is equipped with comfortable seating, Book you’re next Honolulu Hi Fishing Charter with Captain Kelly or Captain Clint aboard Mozel Tov – You’re Gonna Love it!

Cancellation policy:
If you need to cancel prior to fishing we allow full refunds prior to 48 hours before your fishing trip.
All bookings will be charged in full if cancelled within the 48 hours of your charter.

The Dolphin, also referred to as Mahi-Mahi or Dorado, is one of the most colorful fish in the ocean, it’s also one of the fastest growing fish in the ocean. They’re eating machines migrating throughout Hawaiian Island waters foraging through the weed of the ocean, called Sargasso weed or sargussum weed, eating baitfish that are feeding on tiny shrimp, seahorses and other micro-organisms that are imbedded in the weed. Although Dolphin will be caught year-round off the coast of Honolulu we catch the big ones on April, May and June.  The Dolphin travellin in schools usually weigh between 5 and 10 pounds, when you get into a school they frenzy, it’s not unusual to have everybody on board hooked-up at the same time, it gets wild. The larger Dolphin travel in smaller groups or pairs, some of these fish will go 40 to 60 pounds. The male Dolphin has a big square head and is referred to as a Bull Dolphin, the female has a rounded head and is referred to as a Cow Dolphin. The only thing better than catchin Dolphin is eating them, no-matter how you cook’em fresh Dolphin always taste great !

The Tuna fishing is excellent off the coast of Honolulu, Hi during the spring and summer months but we catch’em year-round. We catch Yellowfin Tuna, Blackfin Tuna, Skipjack Tuna and Bonita. The Yellowfin Tuna will start showing up on the east side of the Oahu in April and continue through August. June/July is prime time for Yellowfins and they range in size from 35 to 75 pounds but it’s not uncommon to hook’em over 100 pounds. The Yellowfin Tuna is one of the hardest fighting fish in the ocean and they taste great on a plate making them one of my favorite fish to catch. The Yellowfin Tuna will be 15-20 miles off the beach of Waikiki and The Mazeltov Sportfishing is the perfect combination of speed, comfort and fish-ability for unforgettable Tuna day!

Being a little smaller than  its Pacific Blue cousin, what the Striped Marlin loses in fighting force it more than makes up for in beauty. Nairagi is commonly known as striped marlin, or a`u, the Hawaiian name applied to all marlin species. It has the slenderest bill and the most visible “stripes” of all billfish and a high, pointed dorsal fin and more compressed sides.  The flesh color of striped marlin varies from fish to fish and varies from light pink to orange-red. Fish with orange-red flesh are particularly desired for the sashimi market. Nairagi with pink to light-colored flesh are bought for up-scale restaurants. It is considered the finest eating of all marlin species because of its tender flesh.  Nairagi caught around the Hawaiian Islands usually between 40 and 100 pounds in round weight and are rarely over 130 pounds.

The Wahoo is the considered to be the fastest fish in the ocean and we catch’em year-round off the coast of Honolulu Hi. The Wahoo fishing is at it’s best during the spring and summer months off the coast of Waikiki Most of the Wahoo will be 20 to 40 pounds but we catch’em up to 60 pounds. The Wahoo bite off the Diamond Head during the winter months is as good as it gets anywhere in the world. Some of these Wahoo will top 100 pounds and 60 to 80 pound Wahoo can be expected.

Call now to book your next Hawaiian fishing charter!